They really did want to hurt me! Boy George reveals how even old ladies hit him with their handbags for his flamboyant dress sense in the 70s

By Spencer Bright For Weekend Magazine

The three-day week, the petrol crisis, relentless strikes, rubbish mounting in the streets and football violence might have figured in the minds of most people in the 1970s, but for the teenage George O’Dowd, soon to be known as Boy George, most of it passed him by.

The political crises of the Wilson, Heath and Callaghan governments were just background noise for George.

He was more interested in the changing fashions – the sequins, loon pants and platform shoes of glam rock which gave way to the safety pins, ripped T-shirts and bondage trousers of punk. 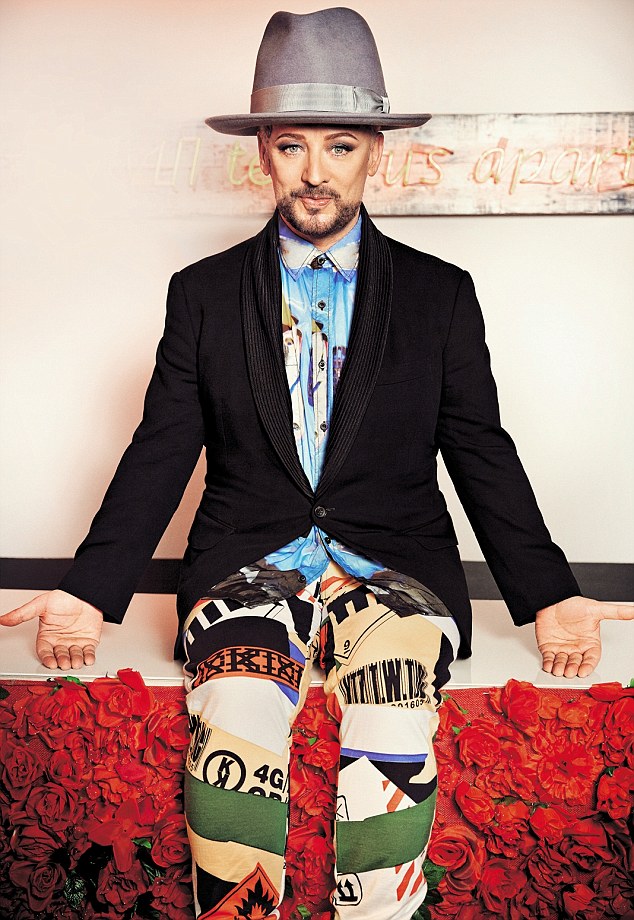 Boy George’s 1970s: Save Me From Suburbia, a fascinating documentary, is on BBC2 tonight

He recalls those times in Boy George’s 1970s: Save Me From Suburbia, a fascinating BBC2 documentary tonight. These were the years that nurtured the beginnings of his metamorphosis into Boy George, one of the biggest pop stars of the next decade and beyond, who went on to sell more than 150 million records with his band Culture Club.

‘I couldn’t see anything happy in the world back then,’ says George on the programme. ‘The adults had lost the plot and governments came and went but they were all being run by grey men.’

He’d dressed up from the earliest of ages wearing Little Lord Fauntleroy outfits, plastic sandals, brightly dyed clothes and his mum’s scarves and by 1973, at the age of 12, the already androgynous George was used to the jeers in the street and at school.

‘Looking unusual could be risky. Looking gay could be worse. I’d walk around the way I did knowing there were loads of people who wanted to punch my face in. Even old ladies would hit me with their handbags. But I was glad to be gay and unafraid. I was the boy next door with peroxide, mascara and a need for fabulousness.’ 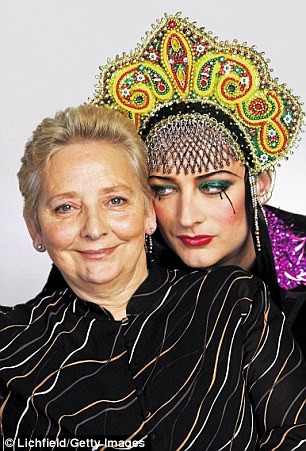 Boy George with his mother. The 70s were the years that nurtured the beginnings of his metamorphosis into Boy George, one of the biggest pop stars of the next decade

Alone at home in Eltham, south-east London, he’d adopt a fantasy life. ‘When the rest of the family were out, my world was a sparkling place where I’d perform with a hairbrush for a microphone to Shirley Bassey songs on the record player. My mum had six children and had to cook and clean and never got the chance to be glamorous. So I became obsessed with glamorous, strong women like Bassey and Joan Collins who got their own way.’ There was nothing average or suburban about George. He didn’t just want that glamour for his mum, he wanted it for himself. His obsession – David Bowie – got him into trouble at school. ‘I’d stare out the classroom window, daydreaming and drawing pictures of Bowie.’

Desperate to get closer to the glamour, he’d turn his school uniform inside out and take the bus up to London’s West End. ‘I told the careers officers I wanted to work in the theatre, perhaps in make-up. They said, “You have to be more practical.” They meant you’ve got to work in a factory.’ He left school in 1976 at 15 and took a job stacking shelves in a supermarket. ‘Looking back,’ he says now, ‘I was dreaming my life would be like Ab Fab, but it was more like Open All Hours!’

I spent many hours talking to George and his parents, Dinah and Jerry, when I worked with him on his autobiography, Take It Like A Man, in the 1990s. I visited his childhood home in Eltham, a drab street where the family lived until George was 13 before moving to nearby Shooters Hill. ‘Music was my only friend, a way of escaping the isolation,’ he wrote in that book, and in the new documentary he admits his early teenage years were lonely. ‘For me, the 70s were about dressing up and going out, learning who I was. I felt as if I was the only gay in the world. Yet the TV was full of them.’

He cites comedian Larry Grayson and Are You Being Served?’s John Inman as two examples, outrageously camp yet never admitting their sexuality, and he talks about them with his mother, Dinah, for the cameras. ‘Nobody ever said they were gay, but at the same time we all knew they weren’t regular guys,’ he says. When he asks his mother if she knew Grayson was gay, he’s surprised when she says, ‘No’. Then he asks Dinah if she’d realised he was gay in his early teens. ‘I knew you were different,’ she tells him. ‘But it made no difference to me. I didn’t know what gay meant then.’

George, at 14, was transfixed when he watched ITV’s The Naked Civil Servant, a dramatisation of the life of Quentin Crisp starring John Hurt. ‘Hair, make-up, openly homosexual. It was beyond brave. I was blown away.’ In 1976, Dinah bought him Rod Stewart’s record The Killing Of Georgie, slipping it into his sock drawer. The song, written by Stewart, was about a gay friend’s murder. ‘It was her way of not talking about it,’ George laughs. ‘She was letting me know she was worried about me, she understood but she didn’t understand.’ 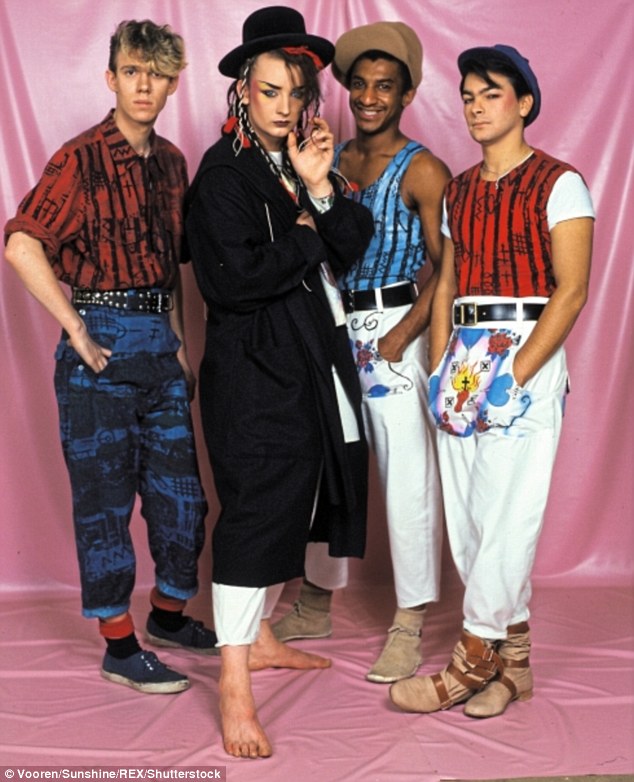 George with his band Culture Club. In the documentary he recalls how he was handbagged by old ladies for his flamboyant dress sense

George’s father Jerry was the kind of man who carried a monkey wrench around in his car in case someone upset him. At home he was just as tough, yet paradoxically he was tolerant towards his son’s sexuality and would pay for George to buy expensive clothes. But as generous as Jerry was to his son, he abused Dinah physically and mentally for most of the 42 years they were married, before leaving her for another woman. ‘I was always saying to my mum, “Why do you let Dad talk to you like that? Why do you let him treat you like that?” Men treated women badly and they put up with it. My uncles and aunts; the men just did what they wanted and the women cleaned up the mess. That’s what I remember from being a kid. That was the 70s.’

George’s father Jerry was the kind of man who carried a monkey wrench around in his car in case someone upset him. At home he was just as tough, yet paradoxically he was tolerant towards his son’s sexuality and would pay for George to buy expensive clothes

But as George says, ‘a new kind of man was emerging through glam rock; a man who was in touch with his feminine side.’ Musical fashions were changing quickly though. ‘In the summer of 1976, I went on punk day trips to the seaside with my mates and spiked my hair with gel that melted,’ he recalls. ‘It was a very colourful time, a liberating time. For me and my mates it wasn’t really about the music or being cross with society. We were interested in a new look and the place to see it and buy it was the King’s Road, Chelsea.

‘When punk started it was completely tied to Vivienne Westwood and Malcolm McLaren’s shop called Sex. It was a way for them to sell more clothes. Punk was meant to be about kicking against the system, but at £60 your Westwood T-shirt was more about submission than sedition.’

George became disillusioned with punk when he experimented with a new look at a gig, and it wasn’t well received. ‘I was doing this Siouxsie Sioux look, frilly shirt, heavy make-up and swaggy hair, but it wasn’t really punk, it was something more. Somebody threw a beer over me ruining my hair and I thought this is not a scene I want to be part of. Punk was fun to begin with, but then it became studenty with violence and spitting.’

Fortunately for George, a new London club scene was forming spawning the New Romantics. He became a key face on the scene but wanted more. When Malcolm McLaren asked George to sing with the band Bow Wow Wow, the thrill of performance convinced him that his future lay in music.

For George, the 70s remain unique – even though he didn’t find stardom until Culture Club’s first hit single, Do You Really Want To Hurt Me? in 1982. In spite of defiantly parading his homosexuality in public throughout the 70s, George decided to be ambiguous about his sexuality when he became a star, making the famous comment that he’d rather have a cup of tea than sex. It was a clever way of avoiding talking about being gay, a confession too far for the public mood of early 80s Britain. But that’s another decade and another story.

‘The 70s will always be very special,’ he says on the programme. ‘I wasn’t a political person – I’m still not. I just wanted people to get along.’ As for music, ‘You’d never be able to have punk rock now. It would be picked up and featured in a Gap advert within two weeks.’ He believes in today’s highly commercialised world, the creativity would be squeezed out of a new movement before it had a chance to flourish. People didn’t have much money back then, but he believes everyone had more time to be creative. ‘When awful things are going on in the world, creativity really blossoms and shines. It’s almost like flowers growing through the cracks of the rubble. Maybe that’s the best way to think about the 70s. They were just bonkers.’

And he should know.